I’m so glad to let everyone know that WereVamp has officially been released.

I’ve celebrated this personal milestone by conducting my first AMA last week which was heaps of fun – it’s funny how you don’t really ponder your own writing journey in detail unless it’s highlighted by a question asked of you (probably one you’ve never really though about before!).

I’m also offering The Last True Blood (the first in the series) absolutely FREE of charge as a promotion and incentive to read the next one, WereVamp (and hopefully get hooked!) for a limited time as well.

Lastly, I would like to urge all readers to conduct an AMA of their own – it was truly fascinating! It was also a lot of fun analysing my own writing journey and I really did meet some awesome individuals. If nothing else, it’s a platform for likeminded peers and the chance to learn and experience more about the written word – and honestly, can there be anything more awesome? Unlikely!

Anyway, until next time, enjoy and please share the love by downloading my book. Self publishing is no walk in the park and anything we can collectively do to make this journey more awesome and palatable is got to be a good thing, right?

Seriously, video takes all the juice out of words and spews it out somewhere else, like a place I can’t get to though I desperately want to.

Sorry about the bleak picture but please allow me to provide you with some background as some sort of explanation for my rather strong stance on all things moving images related.

I’ve been busy in the deep, dark depths of video for the past 3 months or so, working on a five part series for my business and boy, am I exhausted! Nothing sucks the life out of someone who would much rather tinker with words as they come to life on paper than video.

It’s exhausting in a way words never are. Don’t get me wrong, writing is torturously tiring on the best of days but there’s a sliver of exciting rejuvenation that lingers long after you shut down your computer at 3am driving you to push forward the next day so you can get back to your mesmerising characters.

Video for me though is just bleh.

I’m sure it’s got its loyalists and fans but I was one martyr that will sunk and burned before I ever got the chance to rise – I was literally obliterated.

Unsurprisingly, I ‘m thrilled to be back in my world of words and mayhem – who knew old school was this cool! 🙂 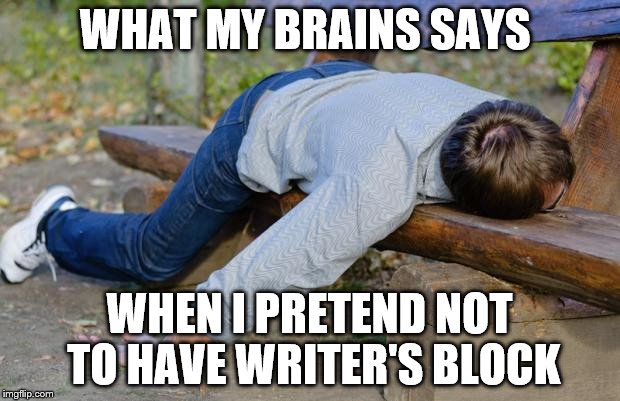 … for being so absent lately.

Though it isn’t an excuse, I’ll fall back on that dismal aspect of human nature and attempt to absolve myself of any wrongdoings by providing you with an adequate 3 point resource on how it’s really not my fault.

Point 1 – I’ve been so busy that if I were a Troll protecting the make believe bridge to Narnia I just made up right now, well, Narnia would no longer be Narnia – it would be the next best holiday destination. I have been writing though, about an article a week but woe is me, much of my time is taken up in maintaining active social media accounts for work.

You need a Twitter, Facebook or Google + guru right now, don’t look at me. I’m fresh out of ideas.

Point 2 – I have seriously pissed karma off and I don’t even know what I did. The amount of minor mishaps I have had with my skeleton over the past month would be enough to fill up a small encyclopaedia. Seriously. From toe injuries to wrist massacring’s, it’s a wonder I still resemble a human body. Fine, maybe not an encyclopaedia but a good weekend read in a grubby motel off Highway 5. At least.

Point 3 – I blame Trump because well, why wouldn’t you?

I don’t think history has ever provided us with such an apt “he is the cause of everything that’s wrong in this world, my life and this entire solar system really” excuse, people. Ever.

I am not kidding. It’s every man, woman and child for themselves and I can’t even copyright this one. Take it. Run with it.

I’ve been busy because Trump exists.

With that being said, I make no promises except an absolute true declaration – I have missed all of you. Truly.

I’ll try and make it up for it and write some more, or at least be more present if my fingers remain from that biyatch injury infliction.

I hope you’re listening karma. I’m a Hindu and I ain’t going anywhere so let’s try and be friends, okay? Or at least civil.

See you soon my peeps xoxo

I just watched a video that discredited the whole elusive work-life balance thing we all crave.

It was for work and I got through four minutes of it thinking there’s four minutes of my life I’m never getting back because it really helped me in NO possible way for my actual job. Even after trying to deploy all my imaginative, creative abilities I pride myself on having honed until now.

But whatever – Another story.

What it did mention though is how the whole work-life balance concept is a piece of you know what because when you love something you do, the lines between work and play blur.

Sounds blissfully ignorant if you ask me.

The guy then mentioned how creatives (supposedly people like you and me) don’t believe in the concept of work life balance because we can’t shut off our creative brain no matter how much we try.

After just having spat out three articles of varying degrees of dullness, today is definitely one of those days I wish I had more write and non-write balance. So to the irritating perky dude who declares work life balance is a façade for us mere folk who would love to be a beached walrus right now, I’d like to politely tell you to shut up.

I’d get more creative with my dismissive attitude but I can’t. My creative side just left me a note that says Do Not Disturb.

You know those days when you realise you haven’t looked in the mirror for a while.

I admit it – I’ve been procrastinating. Writing the last couple of months has been nothing short of an ordeal for me, like Build Rome in a Day sort of suffering rather than incinerate it.

I’m not saying I’m cured or anything but the below video really helped to put things in perspective for me once more. It’s easy to forget the love I have in my bones for this beautiful creative piece of life and though I tend to feel brain dead most days with regards to creating words out of thin air recently, this video stirred that passionate, wanting desire I have for letters all over again and that’s got to be a good thing, right?

Don’t stop what you love people, just remember, fights are a normal part of an unhealthily healthy, obsessive, hot, overzealous love you have with something or someone. So to my writing gene, I have three words for you. Bring – It – ON.

I swear, this is a viable condition often experienced by Writer’s in winter. It’s called Frozen Writer’s block. There’s no cure except for gluttonous extreme vegetation in front of the BBC channel for inspiration.

You know that saying, one girl’s loss is another one’s gain. You’re welcome, another week free of punishment from my brain. Don’t say I don’t give you anything.

Disclaimer: For faster results, attack the virus with a never ending supply of buttered popcorn and unhealthy salt and fake cheese infused Cheese and Bacon Balls.

Let me know if you want my address or I could just lie here with my mouth open and you can pelt junk food into it. See, there’s a positive to everything – even Frozen Writer’s Block.

Find what you’re looking for …